“Fortunately, because the cancer was found early enough, the surgery was successful. But I never would have found it early if I hadn’t been screened,” says Robert. 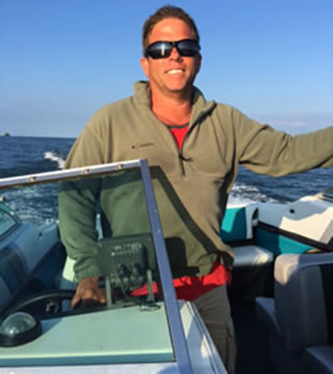 I’m a father of two, husband, and salesman who travels around the country for work. I’ve had a full life. I watched my daughter graduate from college and graduate school, and my son graduate from high school. Now that both of our kids have left the house, my wife and I are beginning the next chapter of our life together.

In 2016, I noticed I seemed to be getting more tired, from traveling I thought. I decided to see my doctor for a checkup. I spoke with him about having a colonoscopy, even though I didn’t have any symptoms, aside from feeling tired. I wanted to get screened because it had been 7 years since my last colonoscopy. Also, my father had colon cancer when he was only 45 years old that he survived. Today, my father is 75 years old and in relatively good health.

I went in for my colonoscopy on January 10, 2017. Although no polyps were present during this screening (or during any screening I had prior), the doctor took tissue samples for a biopsy. A week later, the results came back and showed that I did in fact have colon cancer. On February 2, 2017, I underwent surgery to get rid of the cancer.

Fortunately, because the cancer was found early enough, the surgery was successful. But I never would have found it early if I hadn’t been screened.

Now, I’m encouraging my wife to get a colonoscopy. People tell me that they are scared to get screened and scared to see what the screening might reveal. But I think it’s scarier if you have a tumor that the doctor can’t remove. I have a few brothers, and all of them have been screened. One of my brothers routinely has polyps that are removed.

If I hadn’t been screened, I wouldn’t have been able to see my son go off to college or enjoy this next chapter of my life with my wife and family. Today, I have a positive outlook on the life ahead of me. I also started exercising again and changing my diet. I’ve been getting back to the old me. Getting screened made me want to go enjoy every day.

(Editor’s Note: The U.S. Preventive Services Task Force recommends that adults aged 50 to 75 years be screened for colorectal cancer. If you are older than 75, ask your doctor if you should be screened. However, if you are like Robert and you have an increased risk of developing colorectal cancer, you should talk to your doctor about when to begin screening, which test is right for you, and how often to get tested.)

Article courtesy of the CDC